Egg Farmers of Alberta initiated an egg environmental footprint project in 2012, to better understand and quantify the environmental impact of egg production in Alberta, through Life Cycle Analysis (LCA).  The first of its kind in Canada, the study involved collecting data from egg farmers covering the life cycle stages of an egg, from feed production to grading. 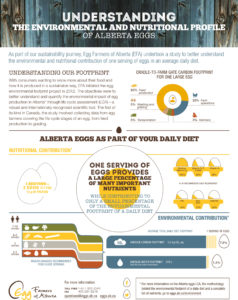 Egg Farmers of Canada released an independent study in 2016 that was conducted by Global Ecologic Environmental Consulting and Management Services, which evaluated the environmental footprint of Canada’s egg industry over a 50-year period.  From 1962 to 2012, Canadian egg production increased by 50% while the industry’s footprint dropped by almost 50%. 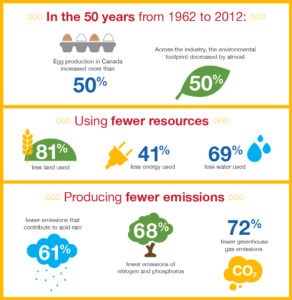 These studies demonstrate the commitment made by egg farmers and industry partners to reduce the carbon footprint of an egg, and improve the sustainability of egg farming in Alberta and across Canada.