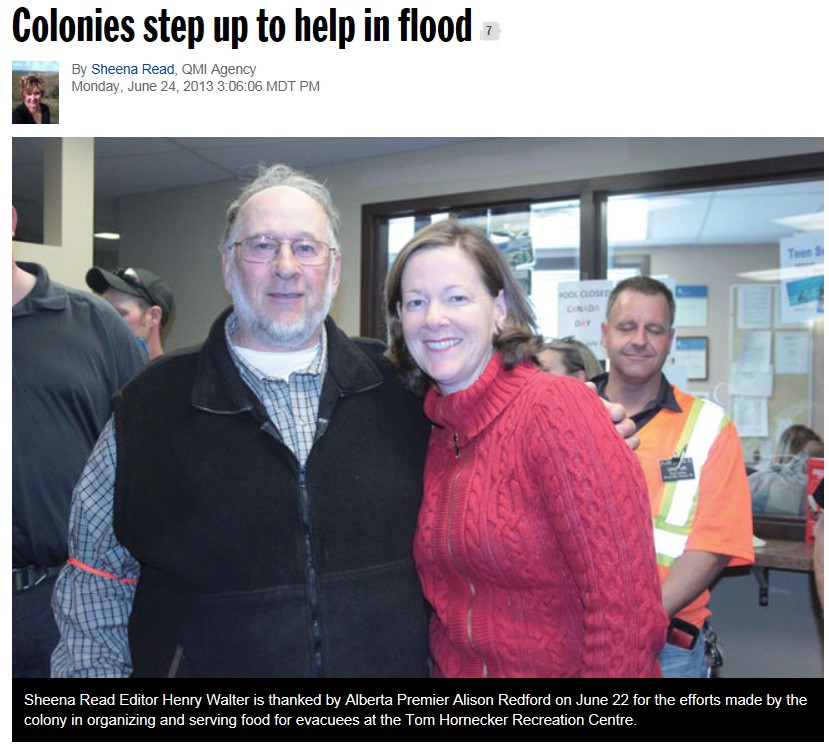 Canada’s egg farmers have always been deeply committed to their local communities so it comes as no surprise that our colleagues in Alberta immediately sprung into action to help people affected by the floods that devastated the province.

Farmers and their families in the Cayley Hutterite Colony near the Town of High River, which was hit hard by the floods, were quickly on the scene. The women took over the kitchen at an evacuation centre in Nanton, brought in vast quantities of food and prepared emergency meals. Once the colony’s fridges and larders were emptied, they made a re-supply run to Lethbridge.

Meantime, the men in the colony headed to town to provide emergency response, which included saving four people adrift in their car.

“They said they can’t swim. He got them out,” Henry Walter told a reporter from QMI Agency, describing the actions of Robert Walter.

The colony’s contributions were lauded by Alberta Premier Alison Redford, who stopped by the evacuation centre to personally thank the community for their commitment to help flood victims.

Overall, ten Hutterite farming colonies responded to the needs of evacuees, cooking a vast amount of meals, many of which included dozens and dozens of donated eggs.

Members of the New York Colony, near Maybutt, AB, arrived with two trailers loaded with food to feed evacuees. And they even got to spend some time with country music star Paul Brandt, who stopped by to show his support. A group of women from the colony were inspired to sing a song for him.

“I know most of these farmers personally so I know how generous and caring they are,” says Susan Gal, General Manager of Egg Farmers of Alberta. “Whenever someone needs help, they don’t hesitate for a second.”

Staff from the Calgary office of Egg Farmers of Alberta also pitched in to help families in High River cope with the destruction. For starters, they prepared 250 emergency lunches made using eggs donated by local farmers.

A team of nine headed to hard-hit areas of High River, handing out food and pitching in as families worked tirelessly emptying their homes of debris, water and mud.

“We went to one neighbourhood where families were finally allowed to move back home,” said David Webb, Marketing & Communications Manager at Egg Farmers of Alberta. “There was debris everywhere. Most people were wearing disposable coveralls and dust masks.”

But despite the devastation, spirits were high–and the people who lived there really appreciated all the help.

“A lot of people told us they love eggs and have eggs every day,” Webb said. “And they told us to make sure to thank the farmers for being so committed to helping others in the community.”