Since the launch of the Producer Environmental Egg Program (PEEP) in 2014, Alberta egg farmers have had a heightened awareness of the environmental impacts of their layer barns, with many taking significant steps to reduce their carbon footprint and enhance the overall sustainability of their farm. From minor changes that helped lead to all Alberta egg farmers passing PEEP by 2021, to major innovations that provide key learning opportunities for the entire industry, every decision that considers the environment is a step in the right direction towards sustainable egg production and climate change mitigation. 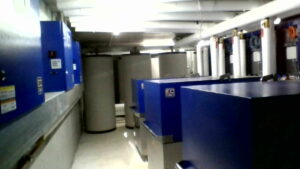 One of the impact areas of focus for PEEP is energy usage, especially as it relates to heating the layer barn and helping to keep laying hens comfortable during harsh Alberta winters. New York Colony, the winner of two Canadian Poultry sustainability awards in 2014, continued their pursuit of more sustainable egg farming when they invested in micro co-generators in 2019. Running off natural gas, their 7 co-gen units produce 150 kw per hour, which supplies heat and hot water for the entire colony (all barns, homes, and other buildings). New York Colony runs their co-gens for 24 hours from October through April, and for just 6 hours from May through September, generating enough electricity to back-feed the power grid overnight. 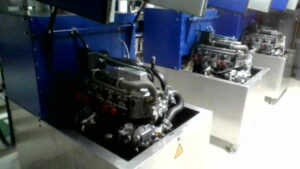 New York Colony is happy with their decision, noting that the co-gens make a huge difference and are very easy to maintain. In addition to being a more efficient use of natural gas, the heat created by electricity generation is being utilized productively instead of going to waste. The colony feels good about increasing their energy efficiency and minimizing their demands from the power grid, with much less power loss. They also appreciate the 35-40% cost-savings on their combined natural gas and electricity consumption.